After failing my first attempt at my Doctoral Language Exam (GASP!), I was unbelievably distraught.  Granted, health issues had affected my ability to concentrate and I had studied the wrong material, but nonetheless, I failed.

While most of my family does not understand my obsession with grades, my brother Ben listened patiently as I pouted, ranted, and raved.  A few days later, he happened upon one of those great little bookstores with the yummy musty smell and books piled to the ceiling (Book Nook in Prescott Arizona).  In browsing, he found a book with an interesting title that made him think of me.  He flipped inside to this passage:

“Mrs. Cooke’s face was a picture of shock and confusion.  ‘Why, Erika, you’ve never failed a subject in your life.  You’ve never gotten less than a B-minus for anything.'”

Too perfect.  He bought the book and gave it to me last Christmas.

Hence the name of this site (spelled correctly).  It will, of course, also come in handy should the need arise for me to force a Democrat from office.

Ah, grad school. It’s funny how much perspective we gain with time and distance, isn’t it? Petty things like tests and grades seemed end-all-be-all important back then. When, in the course of my daily life today, will I ever need to be able to translate passages of literature into English? And if I did, why would’t I just use Google Translate?

I did love graduate school and I miss being a creative writing major… when I read 2 or 3 books every week and writing was my whole world. I loved the daily camaraderie with fellow students and professors and even though I stay in touch with many of them, it’s just not the same. 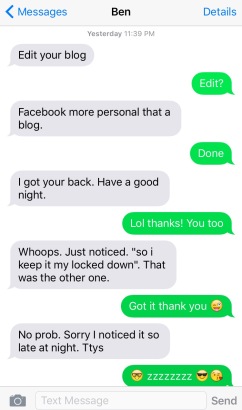 So anyway… that’s where Erika for President came from and I love it. My brother (who is an amazingly talented artist and is also currently writing his own novel but needs to update his blog) still “gets” me. The other day he sent me a text at nearly midnight to alert me about a couple of typos on my blog that, of course, I had to fix right then and there.

Perfectionism is a bitch, ain’t it?

But, even though I still have to spell everything right (yes, even in texts I capitalize sentences and use punctuation), I have mellowed considerably when it comes to “perfection” … especially in writing. What I have come to realize since grad school is that there’s no such thing as perfect – often because of subjectivity. I know there will be people who love what I write and people who don’t. I’m okay with that. I know that I’ll look back at something I wrote, like the passage above, and think of all kinds of ways I could edit it that may, or may not, improve it… until more time passes and the eyes of an older me see even more ways to edit it. I think this realization has triggered my desire to write fiction again after so many years of writing non-fiction.

I am Erika for President – I represent the writers and my platform is that whatever you write can only ever be as “perfect” as it is in that moment – with what you know then and have experienced up to that time then. Whomever reads it will bring their own experiences and their interaction with what you wrote will be personal to them – and some will like it while some won’t. And guess what? With the perspective of time and distance, you won’t even care. It just won’t matter to your future self the way it churns your stomach up today, so just let go of it. All of it. Let go of all of your critics, especially the one inside your own head.

i'm just me View all posts by erika leigh

This work by Erika Burrows is licensed under a Creative Commons Attribution-NonCommercial-NoDerivatives 4.0 International License.